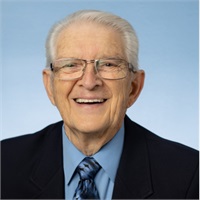 Chuck is a Registered Principal and a Designated Supervisor with Cetera Advisor Networks LLC, member FINRA/SIPC (Cetera).  He also holds the Professional Plan Consultant (PPC) designation and is a licensed life and disability insurance agent.  He manages the Branch Office known as Legacy Financial (dba) in Cerritos, CA, along with his son, David.  Each Branch Office of Cetera is individually owned and operated.

Chuck graduated High School in Blackwell, Oklahoma, and joined the Army in 1956.  After graduating from Jr. College, he moved to Wichita, Kansas, where he attended the University of Wichita while working for the Coleman Company.  Later he was asked to represent them as a member of the Wichita Jr. Chamber of Commerce.  Relationships that he developed through the Jr. Chamber ultimately resulted in his moving to Los Angeles, CA.

In 1963, Chuck entered the financial services industry working for Shearson Hammill in Beverly Hills, CA, a New York Stock Exchange member firm.  They provided him with good training, but after a few years he felt that their firm’s requirements were making it difficult for him to provide a quality of service that was in the clients’ best interest.  Therefore in 1969, he set out to become a Registered Securities Principal and a Financial Principal, to establish his own securities firm, Charles A. Neff and Associates, which was later incorporated.  Over the next few years, he built his firm by adding representatives who shared his values and goals of providing high quality service to their clients.

In 1983, a new broker-dealer, Financial Network Investment Corporation (FNIC), was being formed and Chuck saw the opportunity to further expand the services he was providing to his clients and representatives.  Within a few months after FNIC was established, Charles A. Neff Investments, Inc. was the first broker-dealer to join the new firm.  Through several transitions FNIC has become Cetera.

He has been an OSJ Branch Manager for over 30 years.  For over 10 of those years with FNIC he was also a Regional Director.  In 2007, Chuck decided to sell his region, consisting of nearly 25 Representatives, to another Regional Director, who has been a personal friend for years. For the last 13 years, Chuck has enjoyed focusing his time on serving his clients.

Chuck believes the best way to assist his clients in meeting their financial goals is to be sure that they have a thorough knowledge and understanding of the opportunities, potential risks, and the expenses, that are involved in personal investments and retirement planning for their future.

In addition to his securities related interests, Chuck is active in serving at his church and other Christian organizations.